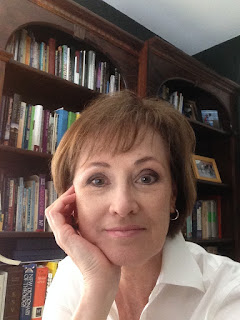 You don’t think that day will ever come.  But eventually, in every woman’s life, comes the moment when someone sees your high school graduation portrait or your wedding portrait and says, “Is that you?!”

It’s shocking to hear.  The change has been so gradual.  It seems to you that the same face has been looking back at you from the mirror since those days.  But obviously, that young face has been replaced by something that is unrecognizable to those who did not know you then.

That happened to me some years ago.  I was tempted to respond, “Well who in the world do you think it is?” but it took me so off guard, thankfully, that I didn’t. However, it does makes me want to say, when I meet someone new, “Hi, I’m Mary Beth, and I didn’t used to look like this!”

There are other consequences to this change in looks that comes with age.  There is a loss of power.  When you are a young woman, you’ve never been anything else, so you are not aware of the power of youth to make a good impression, to open doors, to turn heads.  It’s all you’ve ever known.  But as the years go by that power diminishes.  There is a freedom that comes with that, too—as men look at you more like a mother or grandmother—no more wolf whistles or men trying to strike up conversations in airports.  But the power factor has changed.

There also can be a crisis of identity, depending upon how much of your identity is tied to your looks.  It surprised me how much this challenged me as time went by.  I was ashamed to realize how much I had depended upon my youth to “win friends and influence people.”  I had thought that my identity was in Jesus Christ, in the fact that He died and rose again to save sinners like me, that through Him God had made me His child and had given me purpose for living and hope in death.  How could I be so shallow?  I knew that looks don’t make you who you are.  I gained 30 pounds my junior year in high school and saw how people’s response to me changed; I became virtually invisible to boys.  Then I lost those 30 pounds my senior year, and guess what?  I became visible again.  So I have always thought that I had a handle on not judging people by their outward appearance.  Except my own, apparently: I struggled to believe that I was as valuable a human being when my looks faded.  Intellectually, I knew that to be a lie of our culture but, emotionally, it felt that way.

Observing the pattern of life, I knew that eventually “Father Time and Mother Nature do a job on all of us.”  I had always said that I wanted the lines in my face to be laugh lines, to chisel joy rather than sadness or bitterness into my countenance.  But things happen—profound grief, difficulties, loss, genetics…and the lines just get chiseled as they will.  And when it happened, when those wrinkles and sags appeared in ways I did not anticipate, there was a point of decision:  Who am I, really?  And who do I want to be now?

My identity is in Jesus Christ.  My chief end is “to glorify God and to enjoy Him forever.”  My desire is to draw other people to Him and to help them grow in their knowledge and love of Him.  My prayer is that He might use me to do this, and since he wants us to “go and make disciples,” He must intend for me to do that in my current physical condition and age.  So, I am asking Him to help me live in a way that will not hinder that purpose.

So, what makes a woman of a certain age winsome?  The same things that make anyone winsome, I’d say: giving smiles, hugs, encouragement…being loving, gracious, empathetic, generous, wise, thoughtful, self-sacrificing, joyful, gentle, kind…basically, being like Christ.  I cannot be those things in my own power, of course—but God’s Word says that He is in the process of making me more like that, through my union with Christ and by His enabling grace (2 Corinthians 3:18).  My job is to trust Him for that and to be about the business of loving Him and loving others.